This week’s celebrity outrage is over Chrissy Swan admitting to smoking while pregnant. If you are on twitter, there’s all kinds of opinions out there. Here are some examples.

cant believe #ChrissySwan!!! harming yourself by smoking is your stupid choice.. Harming an unborn child is selfish and unforgivable

Dear world, What goes in Chrissy Swan’s mouth is NONE of your business! So many perfect ppl around, huh?

Some people are outraged that she did it, some are outraged that people are crucifying her for it (or are “judging” her for it), and others seem to fall somewhere in between, perhaps pitying her. Ordinarily I’m an advocate for women (and people in general) doing what they want with their own bodies. If you want to drink heaps, smoke pot, do drugs, eat junk food 7 days a week, not brush your teeth, not wear your seatbelt, insert any other irresponsible activity here, then by all means go for it. But when you are pregnant and you do these things, you risk causing significant harm, possibly death, to your unborn child. The warnings can not be any clearer, nor simpler.

To the people who say a pregnant woman’s body is her’s and her’s only, I say this. It is her body, but she is sharing it with a baby, she is growing another human being, she is creating the miracle of life. That is not a right. It is a privilege and an honour.

To the people who say smoking is an addiction, I say this. If smoking is ok, then what else is ok? Alcoholism? Heroin? Cocoaine? All addictions that carry severe warnings and risks for anybody, let alone women who are pregnant!

To the people who feel sorry for Chrissy right now, I say this. What about the babies – born and unborn – who are subjected to parents who give them the worst possible start in life? Would you walk in the middle of the road and risk getting hit by a car? Would you let your toddler in the pool unsupervised? Then why do anything while pregnant that carries a higher risk of stillbirth, SIDS, premature birth, heart defects and more.

Is it really none of our business? If we know a pregnant woman who is abusing her body and her unborn child, then who’s business is it? Who is going to stand up for the child when they certainly have no voice of their own? It doesn’t mean I think I’m perfect. It certainly doesn’t mean I haven’t made some mistakes. My son fell off the bed when he was an infant. Twice. He fell out of the car when he was a toddler. I am not a perfect mother. There is no such thing. But for the love of healthy babies, if you KNOW something is “wrong” – she admitted that much – please seek help from a GP or other health practitioner.

If you really think smoking while pregnant is not a big deal, please read this. I don’t say all this to judge Chrissy. I don’t say it all because I think I am better than her, or because I think it is easy to stop smoking. I say it because people need to be educated about issues such as this, and I say it because people need to be held accountable for their actions. They also should know there are plenty of places to go to get help. All you have to do is go to the movies to see the Quit For You, Quit for Two campaign. 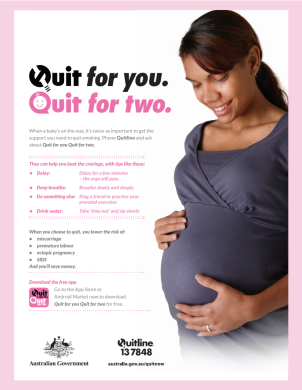 I don’t think issues like this should be brushed under the rug. I don’t think it should be excused for any reason. As women and as mums, we don’t have to crucify Chrissy Swan or the other 14.5%* of women who smoke while pregnant in Australia. Most of them will be disappointed in themselves enough, without having to worry about what we all think about them.But we also shouldn’t enable them and make excuses for them. Let’s educate them and get them help! For their sake and their child’s.

Back in 2007, my husband and I made the decision to relocate from the US to Australia, my home country. Prior to leaving the US we took a 3 1/2 week trip to Europe, figuring we didn’t know when we’d get a chance to go back. We were moving to Australia to start a family. The plan was to move, get jobs, start trying. The best laid plans….

We started in England, where we stayed with friends of mine, an hour outside of London. After a few days with them, we went to London for a couple of days. We were on the train from our hostel to the city, when I noticed 3 women sitting across from me. Not traveling together, but all well in to their pregnancies. A couple of days later, we got the Eurostar in to Paris where we spent a forgettable three days. After that we trained it to Florence. I fell in love with Italy the second we got there.

After a few days in Florence we took another train (truly the best way to travel in Europe!) to Rome where we were planning to spend 5 days seeing some of the oldest places in the world. It was absolutely magical and I loved every part of Rome. I wanted to live there. About 4 days in, I was exhausted. We had taken a day trip to Pompeii, and it was all I could do to walk around the town. We had also walked just about every inch of Rome, from the Colosseum to the Pantheon to the Spanish Steps to the Trevi Fountain, we had seen so much. And everywhere we went I kept seeing shopping bags from a European baby store.

The next day, sitting at a cafe, as you do in Italy, I wondered why I hadn’t got that lovely monthly visitor all women get. I had been expecting it back in Paris or Florence, but nothing. We had walked all over Europe and I hadn’t lost any weight. I was exhausted. “What if I’m pregnant?” I said to my husband. “Nah, surely not” I said.

The baby bags kept popping up, and I believe my exact words to him were, “If I see one more of those bags, I’m taking it as a sign I am pregnant.”

I could not make up what happened next.

We walked around a corner, and there was the store. That night, in the Roma train station, I bought a pregnancy test, it was all in Italian. But we knew what Positivo meant. And it came up Positivo in mere seconds. I will never forget that moment, I was in shock, my husband was so excited I thought he’d scream it from the rooftops to all of Rome.

Now I see pregnant women everywhere, but it’s just a sign of what I don’t have.

Do you look for or see signs? It seems lots of people do. Linking up with the Fresh Horses Brigade at Edenland.

All acronyms I never thought I’d need to know so intimately.

Something I never thought I’d have to keep track of or understand.

When you’re TTC you record and chart your BBT and CM to keep track of your CDs hoping to figure out when you O so you can BD or DTD. Then you find yourself in the 2WW, hoping AF doesnt show up and you can do a HPT, crossing your fingers for a BFP not a BFN so you can estimate your DD and tell people you’re PG. All without going IFS (in-fucking-sane for those who might be tripped up by that one).

I’m current in the 2WW and the chart looks perfect, today, CD 15, 3 DPO. O looks good, BD was timed perfectly, temp is where it should be. Now we wait and hope and pray and hope some more.

Every little twinge, cramp, flutter, ache I feel in my uterus area has me wondering, “Is it burying in and sticking? Is it working? Is this finally it?” It’s impossible not to think about it. Not to think about when I can test, how I will tell hubby, what the DD will be, what name will we give him or her (probably him as Hubby’s family is domainated by males), and then I have to really make an effort to stop and pull myself back to reality.

Hoping and praying AF doesn’t rear her ugly head. Whcih is what I will do for the next 11 days. If you have any baby dust please send some my way.