From the time my son was born, I knew I was going to have to start censoring myself. There are times I could make a sailor blush – and have made sailors blush! I work in a male-dominated industry. Not that that’s much of an excuse. My husband works with all men, and he manages to leave his potty mouth at work. Mine goes everywhere with me.

So when my son started talking, and copying everything we said, as they do when they’re toddlers, I knew I needed to step up my game, concealing my penchant for swearing.

Then last week, on the way home from school, I said, “How was school buddy?” “Good,” came his reply. “Did you get up to 3 stars?” He had been on 2 stars the day before so when I dropped him off I told him his goal for the day was to get up to 3 stars. He shook his head and hung it. He said, “L-e-a-v-e-l …” and held up 4 fingers. I was shocked. And not just at the fact he couldn’t spell level yet. How did he fall from grace, and fall so far? He pulled out a pink slip.

The dreaded detention pink slip. I read it and had to stifle a laugh. 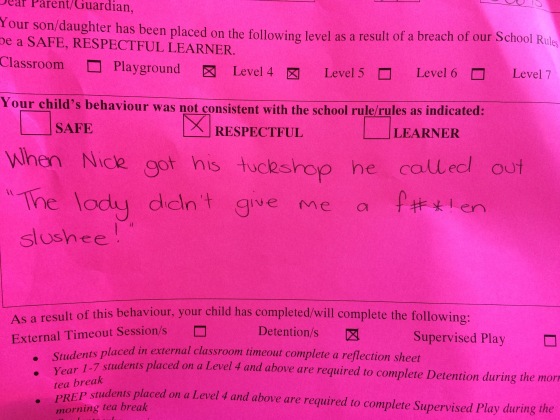 The positive we took from all this is that when the teacher asked him if he’d said the F word, he admitted to it. We told him how good he was for not lying, but that that kind of language is inappropriate at school – or anywhere for a child his age. I told him that when he’s an adult, he can say it as much as he wants! And I also told him that mummy would try really hard not to say it either.

So far I haven’t been very successful, but I think I’ve been better about not saying it around him. If all else fails, it’ll be the same lesson my father taught me – do as I say, not as I do!

Has your child ever said a bad word? At school? Did you laugh or were you mortified?

Linking up with Jess for I Blog On Tuesdays, because it’s Tuesday, and it’s been waaaaay too long.